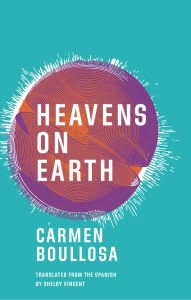 Three narrators from different historical eras are each engaged in preserving history in Carmen Boullosa’s Heavens on Earth. As her narrators sense and interact with each other over time and space, Boullosa challenges the primacy of recorded history and asserts literature and language’s power to transcend the barriers of time and space in vivid, urgent prose. 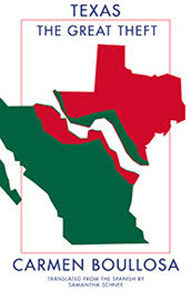 Loosely based on the little-known 1859 Mexican invasion of the United States Texas: The Great Theft is a richly imagined evocation of the volatile Tex-Mex borderland, wrested from Mexico in 1848. Described by Roberto Bolaño as “Mexico’s greatest woman writer,” Boullosa views the border history through distinctly Mexican eyes, and her sympathetic portrayal of each of her wildly diverse characters—Mexican ranchers and Texas Rangers, Comanches and cowboys, German socialists and runaway slaves, Southern belles and dance hall girls—makes her storytelling tremendously powerful and absorbing. 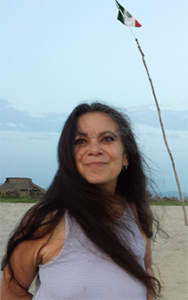 Carmen Boullosa is a poet (La Salvaja, La patria insomne), playright (Cocinar hombres,Trece señoritas) and novelist (La otra mano de Lepanto, and El libro de Ana, and, coauthored with Mike Wallace, the essay Narco History, How the United States andMexico Jointly Created the “Mexican Drug War” (OR Books). In English translation, the novels Texas, The Great Theft (trans. Samantha Schnee, Deep Vellum), Heavens on Earth (trans. Shelby Vincent), Before (trans. Peter Bush, Deep Vellum), and Cleopatra Dismounts (trans. Geoff Hargraves, Grove Press), among others. There are more than a dozen books and over ninety doctoral dissertations that deal with her work. She was a Distinguished Lecturer at City College, and has been a visiting at Columbia, NYU, Georgetown, Blaise Pascal and SDSU. An exhibit of some of her art was held at Museo Carrillo Gil (Las despechadas). Recipient of the prizes Xavier Villaurrutia in Mexico, Anna Seghers and LiBeratur in Germany, and Novela Café Gijón, in Spain, Boullosa has won five NY-EMMYs for the show “Nueva York”—at CUNY-TV. She has been a Guggenheim and a Cullman Center Fellow. The NYPL acquired her papers and artist books. 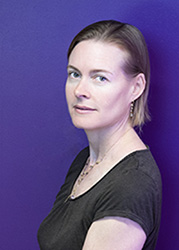 Samantha Schnee’s translation of Carmen Boullosa’s Texas: The Great Theft (Deep Vellum, 2014) was longlisted for the International Dublin Literary Award, shortlisted for the PEN America Translation Prize, and won the Typographical Era Translation Award. She won the 2015 Gulf Coast Prize in Translation for her excerpt of Carmen Boullosa’s The Conspiracy of the Romantics, and her translation of Boullosa’s latest novel, The Book of Anna, will be published by Coffee House Press in 2019. She is the founding editor of Words Without Borders and currently serves as secretary of the American Literary Translators Association. She also chairs PEN America’s Heim Translation Grants jury and is a trustee of English PEN. 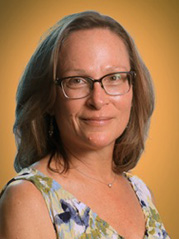 Shelby Vincent‘s translation of Carmen Boullosa’s Heavens on Earth, was runner-up for the 2018 Texas Institute of Letters’ Soeurette Diehl Fraser Award For Best Translation of a Book and was long-listed for the 2018 Hugo Award for Best novel.